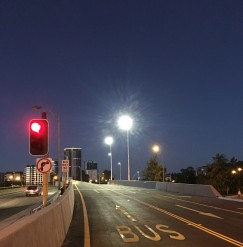 The $32.1 million project included construction of a 120-metre ‘bus only’ bridge over the Graham Farmer Freeway and the new Roe Street freeway off-ramp into Northbridge.

Additionally, 500 metres of new bus lanes were created on Charles Street between Newcastle Street and Janet Street in West Perth as part of the project.

QTM Electrical played a major role in the project which included the modification of four intersections including the complete rebuild of Newcastle and Charles Street.

We also installed a new intersection for the new freeway off-ramp to Roe Street, new LED street lighting for the busway and upgraded Main Roads’ fibre network in the area.

“About 16,000 passengers and 1,200 buses will traverse the bridge and busway each day, alleviating traffic on other CBD roads and shaving up to six minutes off peak hour trips.

QTM Electrical Operations Manager Matt Bendall said that this project was a considerable one for the business.

“This was a design and construct project that included traffic signals, street lighting and ITS, for both Main Roads and the Public Transport Authority,” he said

“We’re proud to be involved with this significant public transport infrastructure project which will benefit so many Western Australians, daily.”

Construction will continue on a bus storage facility off James Street in Northbridge and new accesses from the bus bridge to this facility, both scheduled for completion in August.