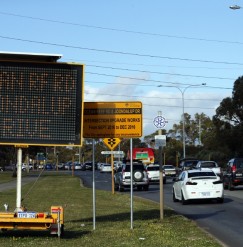 The total project, which is made up of $1.5 million from the State Government and $165,000 from the City of Joondalup, was awarded to Tracc Civil, with the traffic signal component awarded to QTM.

Joondalup Mayor Troy Pickard said the Joondalup Drive-Ocean Reef Road intersection was an important part of the City’s road network and the upgrades will provide convenient and efficient traffic movement.

“Traffic issues in Edgewater have grown in recent years and the City has taken steps to address this, firstly by undertaking detailed analysis of the traffic conditions in and around the suburb as well as assessing potential solutions,” Mayor Pickard said.

“The result of this analysis is a significant upgrade of the intersection that will allow for better flow of vehicles now and into the future.

“Works to this intersection will also have a positive effect on the Edgewater Drive–Ocean Reef Road intersection.”

QTM’s Managing Director Greg Bendall said that it was great for the company to be involved in such a significant State Government-funded project.

“We know the upgrade to this intersection in Edgewater has been a priority for its residents and we are looking forward to providing better access and a safer intersection at Joondalup Drive and Ocean Reef Road,” he said.